Our primary focus is helping you to color your hair using pure plant pigments which have been used for thousands of years. People of every age and ethnicity color their hair for numerous reasons. Why choose herbal colorants?

Repair hair that is damaged. Cover gray better than chemical colors can.
Pure herbal dyes are nontoxic (though anyone can be allergic to anything).
Through an application of a paste or “mud,” people find the process relaxing, soothing, and conditioning.
These natural materials connect us to ancient traditions while nourishing our hair, our spirit, and the earth.

When coloring hair with herbs, your hair’s original color or base color is taken into consideration to achieve color goal results. Mixing different herbs together along with percent of gray creates a wide range of color options. 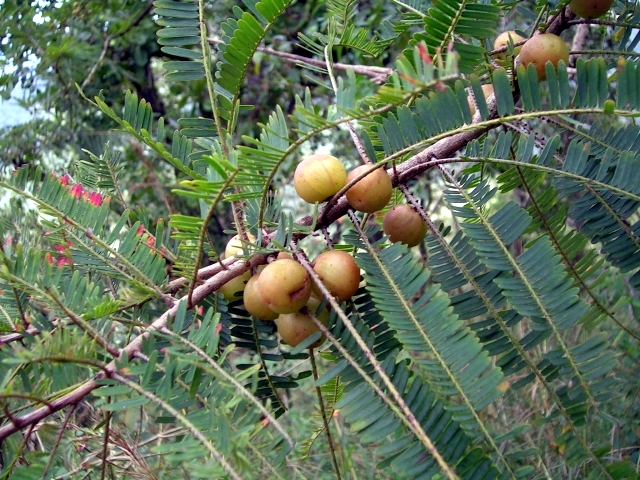 While the dried, powdered fruit of Amla is not considered—strictly speaking—a colorant for hair, amla is useful for adjusting color tone. In my experience, it actually turns out to have a subtle effect, creating a cool brown tone when used repeatedly. It is used alone for hair therapy to stimulate hair growth or to add volume or “body” to hair. Amla has been appreciated medicinally as well as  cosmetically for thousands of years, not just on hair but also often as a facial scrub and toner. Today it may be found as an ingredient in shampoos and hair oils.

The amla tree (Emblica or Phyllanthus of icinalis), native to India, is also commonly called the Indian gooseberry. The fruit is fibrous and astringent fruit, with one large stone. It is not to be confused with European gooseberry (a bush whose fruit has many small seeds), which grows in Burma, Ceylon, and central and southern India. The amla tree’s trunk twists with smooth spiral branches that sprout out vertically around it. It has simple feathery leaves. The flowers are greenish­ yellow, as are the furrowed fruits that set along the branches. Harvesters climb to the upper branches to gather the fruits by hand.

Cassia Obovata (genus: Senna italica) dried and powdered, leaves are used to color and condition hair, and are traded internationally as a hair conditioner.

Senna is a large genus, there are 400 species, many of which are used in Ayurvedic and Unani traditions and recorded in Arabic pharmacopoeia during the ninth and tenth centuries, all share chrysophanic acid, an antimicrobial substance, which, in its pure form, is yellow. High concentrations can stain skin and hair a yellow tone. Thus it is often referred to as “blonde henna”; however, this is a misnomer as henna is a completely different plant and produces only red tones. It is also referred to as “colorless” or “neutral” henna because it cannot “lift” or change the pigment of dark hair, and initially may take frequent applications to achieve blonde tones on gray hair, cassia will “tone down” by producing a translucent tone on silver/gray hair.

Those with naturally lighter hair shades such as dirty blonde, blonde, strawberry blonde, cassia will add brightness and richness of color to their natural hair color. Cassia is also mixed with other herbal colorants to create a color blend you desire.
Combine with different amounts of henna to create shades of strawberry blonde, copper, and carrot. Cassia/Senna is a tree in the legume family. Adapted to warm temperatures, the plant may grow throughout the year. It is native to West and North Africa, Sudan, the Horn of Africa, and the region from Yemen to Northwest India; it has naturalized in some parts of South Africa. It is usually referred to by its growing location, i.e.: Senegal senna, Italian senna, or Port Royal senna. 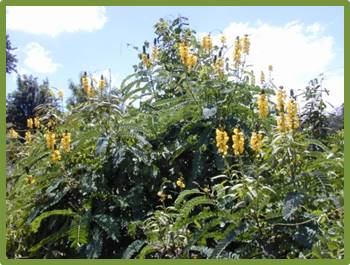 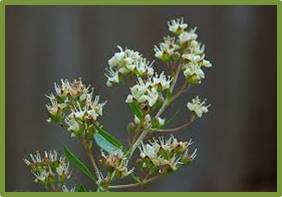 Henna, known throughout the world for its beautiful red dye since ancient times, the dried and powdered leaves of the henna plant have dyed a wide range of items, such as fabrics, leather, skin, fingernails. It is the oldest recorded cosmetic and hair dye, 6,000+ years; ancient Egyptians used henna to color their hair. Anywhere that has a hot, dry climate where henna is grown usually has henna traditions.

True henna, Lawsonia inermis, is a moderate sized thick shrub. Also called the mignonette tree and Egyptian privet, henna is native to the semi­arid and tropical areas of North Africa, the Horn of Africa, the Arabian Peninsula, the Near East, and South Asia as well as Australia, New Zealand, New Guinea, and nearby islands in the Pacific Ocean. It has small white or pink flowers and small round fruits with a distinctively sweet aroma. Its bark and seeds have been used for therapeutic purposes in Unani and Ayurvedic medicine for centuries. Henna has a cooling effect so it is applied to burns and scrapes.

Henna is also a complete sunblock. When your mehndi body art fades, a reverse pattern remains where your mehndi was. This natural sun blocking quality also protects your hair!

“Neutral henna” and “black henna” are misnomers since henna is only red; these are other herbs that come from other plants, or perhaps from even questionable substances entirely.

Indigo was marketed as “black henna” in Europe and North America during the 19th and 20th centuries. It is similar to henna in that its dried powdered leaves are made into a paste and used for pigment, and when combined with henna it stains hair black. See Indigo

Caution: If you see a product labeled “black henna,” it may be pure indigo, a combination of indigo and other plant pigments, or contain no indigo at all and may contain unlisted dyes and chemicals and a toxic coal tar dye called p­phenylenediamine (PPD) which can quickly stain skin black and can also cause severe allergic reactions and permanent scarring. The FDA specifically forbids PPD to be used for that purpose and may prosecute those who produce “black henna.” Artists who injure clients with “black henna” in the United States may be sued for damages. For more information on PPD check out Gina Marie Taro

Indigo, like henna, is derived from dried, powdered leaves and is among the oldest known dyes. It has been used since time immemorial for printing and dyeing textiles. For the past 4,000 years, it has also been used to color hair. India is the oldest known center for indigo dyeing.

While most dyes today are synthetic, natural dye from indigo is still available and promoted as a natural coloring. Indigo is used most often with henna to achieve deep reds, brown reds, browns, and black. Used alone on pure white hair, and it produces a vivid bright green or teal, then an amazing deep purple and sometimes blue/green.

Indigofera tinctoria, common name “true indigo,” was one of the original sources of blue dye (woad was another). Indigo has naturalized to tropical and temperate Asia and parts of Africa. It has been cultivated for many centuries worldwide; its native habitat has not been determined.

True indigo is a shrub that is 3 to 6 feet tall. It may be an annual, biennial, or perennial, depending on the climate in which it is grown. It belongs to the quite large plant genus Indigofera, which boasts over 750 species. It has light­green feathery leaves with bundles of pink or violet flowers and is a legume. Similar to other legume crops such as alfalfa and beans, it is rotated into fields to nourish the soil. The related “wild blue indigo” or “false blue indigo” is a related North American plant, Baptisia australis. Baptisia australis was used by native people to produce a much weaker dye. 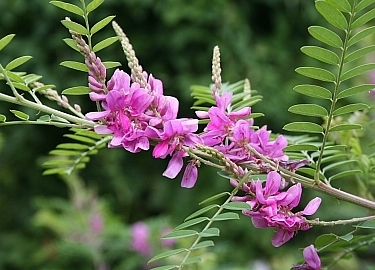