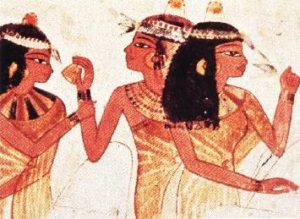 Self care is not a modern phenomenon. Beauty care rituals have been common throughout all cultures of the world for thousands of years, including hair, face, and body care, as well as makeup practices. Local herbs, spices, flowers, barks, clays, minerals, air, light, sound and more were used in beauty care rituals of ancient times. While the beauty world looks to the past thinking it has evolved into more advanced practices, ancient traditions are still more reliable and can be superior to current practices.

Ancient beauty practices were not separate from daily health care, over time ideologies divided spirituality from the body. What was once considered care of the “body temple” turned into “vanity” or “luxury”. As these intertwined parts of the Self became further separated, beauty came to be perceived as a medical treatment that “fixes” the body. To shift this mentality, we can look to traditional, natural beauty practices from our various heritages, for me that is the Middle East. Ancient Egypt, a highly advanced civilization, is undeniably known for its sacred splendor and beauty rituals widely used to this day.

A known ancient Egyptian alchemist, Renuatum, would have his patients eat a certain weed growing along the Nile River, and created a lotion from the same to be applied to an affected area. Clothed in white muslin, they would stroll along the Nile in the afternoon so the Sun God, Ra, would heal the patches of red scales.

Renuatum’s practices can still be found today. In 1974, Massachusetts General Hospital, with Harvard Medical School, created a medicated lotion called methoxysalen, which was derived from this Nile weed and its photoactive elements. When combined correctly with UV light therapy, the lotion inhibits the overactive growth of skin cells of psoriasis.

This weed, Ammi majus, originating along the Nile River banks is in the Apiaceae (carrot) family, and is also present in bergamot oil. After application to skin and exposure to UVA radiation, “the skin may turn brownish due to the phototoxic effects of methoxsalen present in the bergamot oil.” Most bergamot products remove Methoxsalen, though it was used by author John Howard Griffin (1920–1980) to darken his skin when he investigated racial injustice in the American South recounted in his book Black Like Me (1961).

While Renuatum was a prince and alchemist with immense wisdom of plants and chemical and electrical forces of pyramids, as well as an instructor of Cleopatra, his sister, Theosebia the Hermetic, was the primary power advancing cosmetics. At twelve, Theosebia would paint her body a pale yellow that appeared to glow in the sun. Her fingertips were colored with henna stain and her eyes lined top and bottom with green and black khol and she traced her veins with a blue colorant and wore hair extensions. At the time, only queens were allowed such adornment, but Theosebia was also a student of her brother Renuatum and respected for her great understanding at a young age.

It is reputed that Theosebia’s cosmetics were considered healing herbal treatments, not just for adornment. The young alchemist also reportedly taught cosmetics to Cleopatra and Roman physicians sought her out, making Theosebia the first cosmetic chemist and female alchemist, her work inpired women becoming the leading Egyptian alchemists. 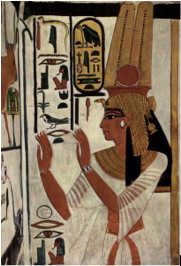 Ancient Egyptian cosmetic preparations were very advanced as they used distillation, extraction, fixation, and maceration practices that were basically unknown and not rediscovered until centuries later. To this day, many key ingredients are still unknown.

Seclusion, symbology and obscure parables contained formulas and theories, creating an air of mysticism. Herbal remedies founded in folklore medicine were shared and passed on through generations. Herbal cosmetics held secrets of the ointment alchemists, who often took their secret formulas with them to the afterlife; others kept the mystery by passing on formulas that lacked key ingredients.

All that is known today is that red ochre, sulfites (kohl), and malachite minerals were used as eye enhancements and liners, while lip color was made with purple and red dyes from seaweed, iodine and carmine beetles. Other substances for bath rituals and body care included almond oil, apple cider vinegar, salt, honey and milk, and of course henna and indigo for coloring hair.

Moisturizing emollients were being used in Egypt to protect skin from the climate as early as 10,000 BCE. Author Judith Illes, having researched ancient Egypt extensively, writes that Egyptians had access to, and used, around 21 different vegetable oils for a range of beauty purposes. Men and women regularly applied oil to their bodies. 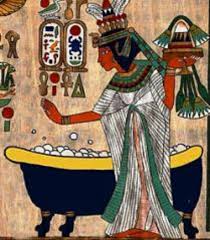 Perfumes were also valued in ancient Egypt, respected for their uplifting health and wellness properties. Resins of Frankincense and myrrh were essential ingredients in perfumes, skin care treatments, dental hygiene, insect repellent, sacred union rituals and a component of the holy embalming process.

Uncovered burials revealed artifacts indicating that beautification rituals were revered in Egypt more than in any other culture; remnants of cosmetics were even found inside ancient Egyptian tombs.